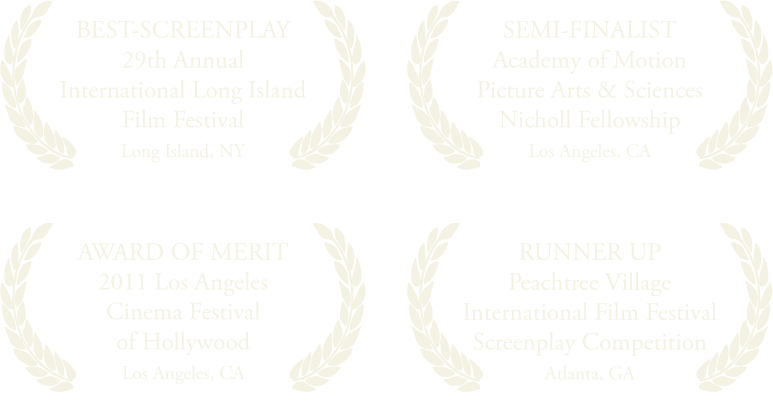 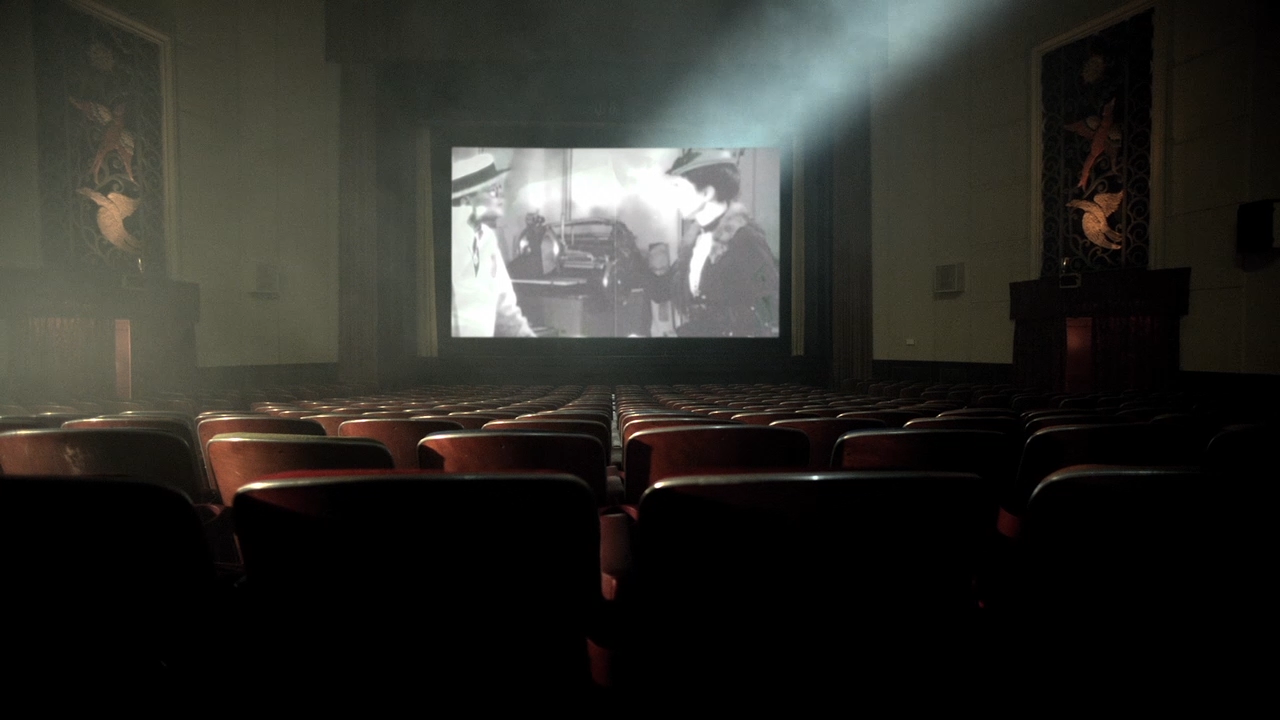 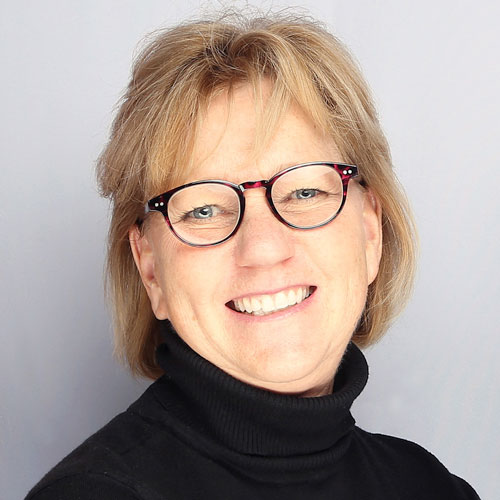 Back then the studios sent their stars out on circuit tours and my grandparents hosted Hollywood greats like Jimmy Stewart, Gene Kelly, Ginger Rogers, and Gypsy Rose Lee.

As a child, I was captivated listening to my grandparents recount stories about the movie business, especially those that took place during The Great Depression. As an adult, I felt compelled to retell their stories and intertwine some of America’s most important, but difficult, history.

Wednesdays at the Gem is not a “white” or “black” story, it is a “human” story that is more relevant than ever. It is a timeless tale about putting aside racial bias and creating something both black and white. Telling this story of segregation and inequality has become an extension of my life, my family, and my Southern upbringing. I have visualized each scene down to the last detail and I cannot wait to start directing this with Rhonda Baraka. Every ounce of it resonates in my being, from the magic of the movies to the immense bravery of a young woman and the power of courage when embodied in a precocious 10-year-old black boy. 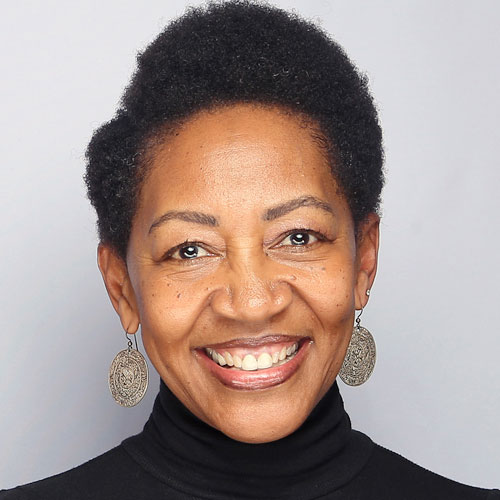 I grew up in Tuskegee, Alabama, a small, predominantly black town of about 8000. I was raised by my grandparents, Annie Mae and Riley Freeman. They were not big shots by any stretch of the imagination, but my grandfather — known affectionately as Big Riley because of his 6’6 stature and gigantic frame — and my grandmother, a spitfire of a woman at 5’5, were respected as hardworking people who stood up for family and “didn’t take no mess.” Growing up under their guidance taught me everything I know about honesty, hard work, equality and faith in God.

My childhood memories are full of fun and often dramatic experiences, courtesy of the many vibrant and colorful characters who frequented our home to buy corn whiskey from my grandfather or sample my grandmother’s cooking. They all piqued my interest and imagination and no doubt inspired my penchant for storytelling.

“Wednesdays At The Gem” is reminiscent of my little hometown. The dialect, the people, the challenges — they all resonate with me. It was the realness of these people and their stories that drew me to this project and ignited my passion for it.

I bring Tuskegee with me in the making of this movie but, most importantly, I bring Riley and Annie Mae Freeman with me. I bring their wisdom, their dignity, and their love for each other, for God, their fellow man and for equality. 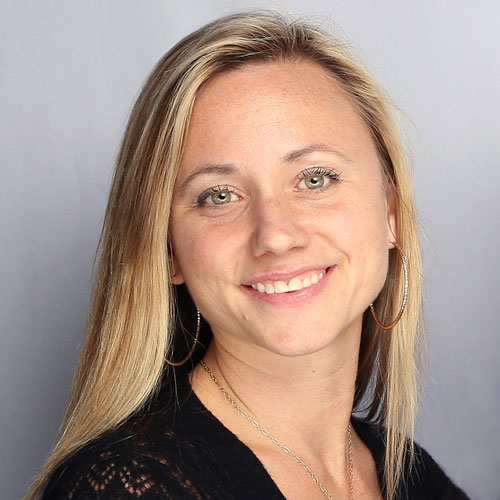 I was raised in the deep south of Alabama by progressive and compassionate parents. They nurtured my creativity and encouraged my choice to pursue a career in the arts at a young age. The fiber of my upbringing was a belief that is was important to identify points of pain in others so you can use your individual gifts to make the world a better place. My gifts have always come in the form of story. I have been a filmmaker and producer for over 20 years. I am most driven by stories the expose truth while giving hope. That is what first drew me to “Wednesdays at the Gem.”

As a child raised in the post civil rights movement era, I have always been fascinated at finding a deeper understanding of the genesis of a conflict that at first glance appears clear to hindsight. Growing up in the South, surrounded by the available and fresh wounds of the past, has taught me that when you seek a deeper understanding, you often find complexities on all sides. Exploring that, in my opinion, is where real healing can begin.

When Rhonda and Joanne first approached me about “Wednesdays at the Gem,” I was drawn in by the opportunity to explore perspective during a painful time in American culture. I was equally excited by the team that surrounded that exploration. With Rhonda and Joanne, the perspective is diverse, which will bring provocative and conversation-provoking characters within the film. Double the talent will come to the table as both ladies seamlessly fit together like a jigsaw puzzle. Their individual strengths are across the spectrum of the Directorial responsibilities. I can not wait to see what vibrancy their collaboration brings as we make this historically important film.

It’s 1939; the Jim Crow South. The glamour of Hollywood is exploding onto the scene and starlets fill the pages of magazines and newspapers. The public is enamored with the magic of the movies. For a mere five cents, people escape to the flicker shows and away from the bone-weary drudgery of the Great Depression.

However, what serves as an escape for many is a cruel reminder of what is denied to others.

Going to the movies is a dream unattainable to a majority of the black population of the South. That is until one courageous 10-year-old black boy has an idea.

A series of life-changing events brings Aaron Adkins to The Gem Theatre. Before long, his youthful exuberance and innocence persuade the theatre staff to sneak the neighboring black community into The Gem. Every Wednesday, a new movie featuring Hollywood ingenue Meredith Maxwell arrives at the theatre. After a day of screenings, the lights go out, the marquee goes dark and unbeknownst to the public, the black community is smuggled in through the alleyway doors for illegal screenings. Within the walls of this movie house, the townspeople sit in darkness discovering and dreaming of life beyond their reach. As imaginations soar, boundaries are pushed and racial tensions escalate with deadly consequences. In a climatic and explosive evening, the Jim Crow laws are openly and cruelly challenged. 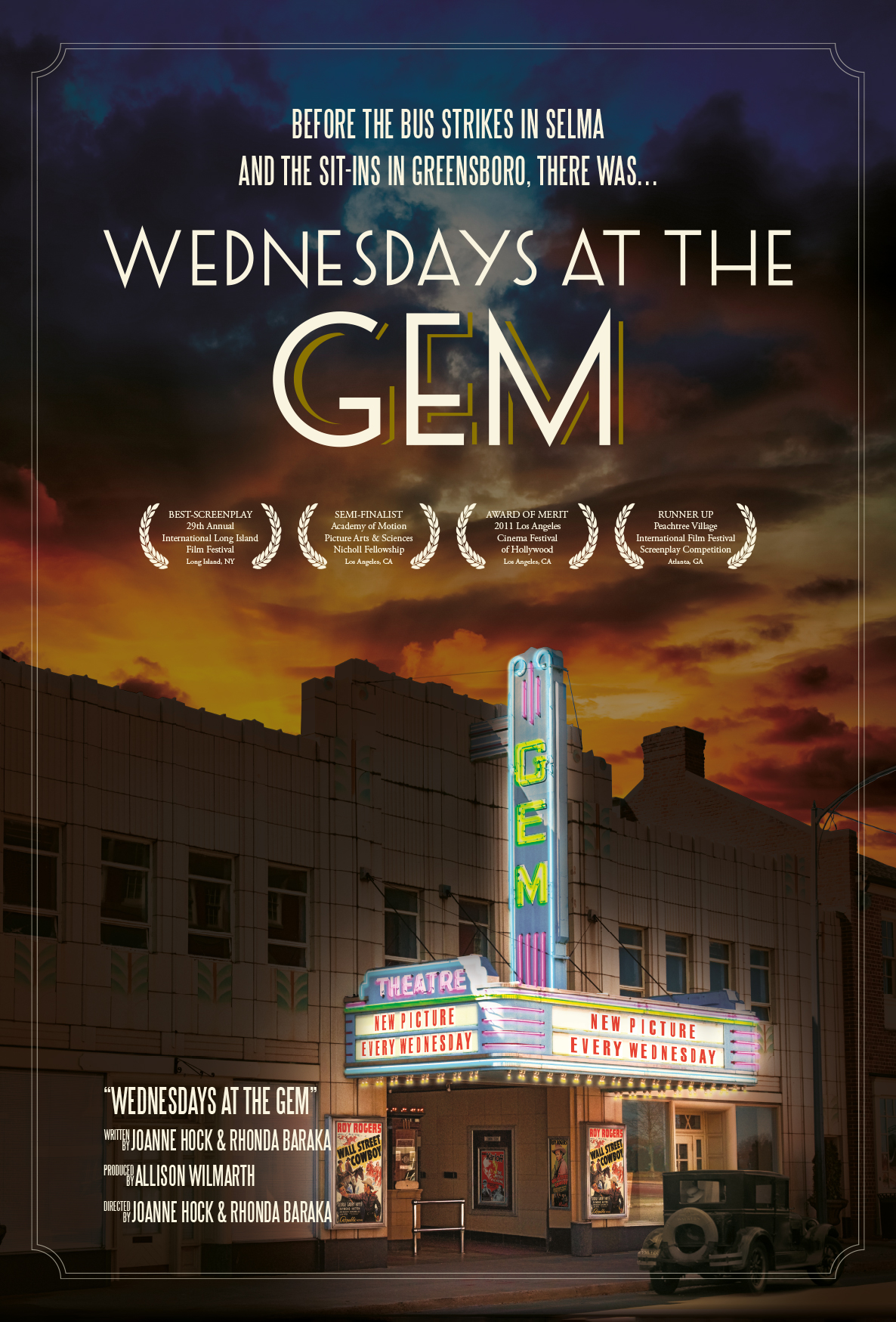 We would love to share details about the development of Wednesdays at the Gem.
EMAIL US FOR MORE INFORMATION
© 2021 Joanne Hock. All rights reserved. Site built by Elwoodesign